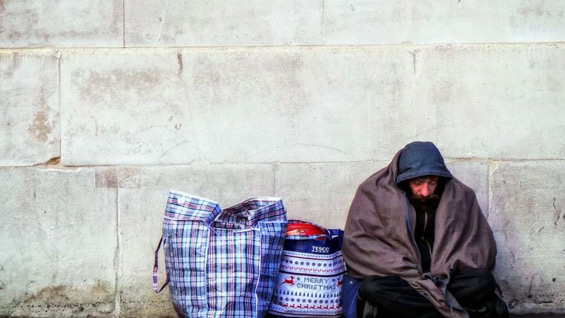 Andy became homeless in 2018. After a relationship breakdown, he began sleeping rough- he was forced to give up his job at the Co-op because he had no clean clothes to attend work and nowhere to get a shower. He attended the Job Centre to claim support, but was told that because he had voluntarily left his job, they could do nothing for him.

Having lost everything and sleeping on the streets, he was eventually referred to Hope House by a Street Outreach Worker. When Andy arrived at Hope, he had nothing but the clothes he was wearing.

Support Workers at Hope House provided Andy with fresh clothes, toiletries, a place to get a hot shower and a bed for the night. They supported Andy to apply for benefits to which he was entitled, and worked with him to build a plan to help him get his life back on track.

Whilst Andy stayed at Hope House, he took over the cooking, cleaning and gardening. After a few months, his financial position was much more stable and he was able to move into one of Hope’s ‘Move on’ properties, homes that are designed to provide a stepping stone between homelessness and independent living. Andy continued to volunteer at the hostel even after he’d moved into the Move on property, and into his own home shortly after. Andy was passionate about ‘giving back’ at Hope House, and continued to work alongside staff to cook food, undertake DIY tasks and keep the hostel running.

Having been through homelessness himself, Andy understood the kind of support that homeless clients needed whilst staying at Hope House. Andy now works at Hope House as a Warden, and is incredibly passionate about working with homeless people to get their lives back on track.